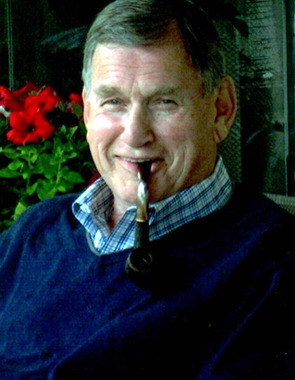 Back to Dale's story

Dale Horatio Van Horne died on January 7, 2020, in Round Rock, Texas at the age of 81 years.
Dale is survived by his wife, Linda; children, Pamela, Natalie, Susan, Catherine, Kimberly, and Alan; grandchildren, Erin, Matthew, Joseph, Kevin, Elizabeth, Garrett, Brandon, Danielle, Cooper, Kourtney, and Olivia; great-grandchildren, Trey and Isabella; and a brother, Robert Carroll Van Horne, Sr. He is preceded in death by his parents, Carroll "Pete" Van Horne and Elizabeth Van Horne; and a brother, Rodger M. Van Horne (infant).
Dale was born on April 24, 1938 in Meadville, Pennsylvania to Carroll "Pete" Van Horne and Elizabeth Van Horne. He graduated from Meadville High School in 1956. He married his first wife, Carolyn McCarthy, in 1958, and within their 27 years of marriage they had four daughters: Pamela, Natalie, Susan, and Catherine. Dale met and married Linda Emmanuel, to whom he was married for 33 years. Linda, from a prior marriage, had two children: Kimberly and Alan, who considered and referred to Dale as their father.
Dale was a savvy business man who was an associate of Fontain International and an Independent Consultant for the Engineering Valve Industries. In his youth, Dale excelled in football and basketball, and loved to play golf his whole adult life. He was a lifelong Pittsburgh Steelers fan who loved to watch his football games with his pipe and Terrible Towel in hand.
A visitation for family and friends will be held from 4:00 p.m. to 7:00 p.m., Sunday, January 12, 2020 at Cook-Walden/Capital Parks Funeral Home in Pflugerville, Texas. The funeral service will begin at 11:00 a.m., Monday, January 13, 2020 at St. Matthews Episcopal Church in Austin, Texas. In lieu of flowers, friends and family are invited to send contributions to the American Cancer Society and the American Hemochromatosis Society.
Published on January 10, 2020
To send flowers to the family of Dale Horatio Van Horne, please visit Tribute Store.

Send flowers
in memory of Dale

A place to share condolences and memories.
The guestbook expires on April 09, 2020.