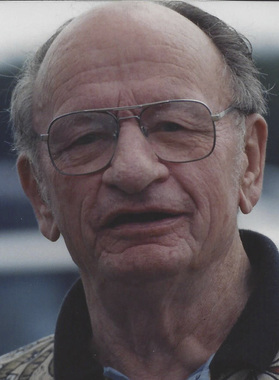 Back to Dick's story

Dick Johnson, Greenville, formerly of Deer Creek Twp. and Grove City passed away at 11:40 pm on Thursday, August 3, 2017 at the Ridgewood at St. Paul's Home, Greenville. He was 90.
Dick was born in Corry, Pa. on March 4, 1927 and was raised in the Sheakleyville area. He attended Cochranton High School and was a life long truck driver for Central Petroleum, Keen Trucking and Hovis Trucking. He also had owned and operated Johnson Fertilizer Warehouse in Deer Creek Twp.
He was a member of the truck and tractor pulling association and enjoyed attending the many pulls. He enjoyed wood working and refinishing furniture. Dick and his wife enjoyed traveling, domestically and internationally having visited Korea, China and Japan while their daughter Ann was working in Korea. He enjoyed playing cards, especially 500 and Phase 10. He was a U.S. Army veteran having served during the Korean War. On April 4, 1953 he married the former Barbara A. Shoffner who preceded him in death on January 3, 2007. He was a former member of the Sandy Lake Wesleyan Church. His Christian faith was important to him and he lived his faith by example always willing to help others.
He is survived by two sons, Scott Johnson and his wife Robin of Hadley and Martin Johnson and his wife Martha of Greenville; two daughters, Cathryn Voke and her husband Stephen of L'Escale, France and Ann Bucurescu and her husband Gabriel of Wyncote, 12 grandchildren and 8 great grandchildren.
He was preceded in death by his wife and a dear cousin, Gene E. Maxwell.
Funeral service will be held on Wednesday, August 9, 2017 at 10:00 am at the Robert L. Snyder Funeral Home and Crematory, Inc. 3223 Perry Hwy., Sheakleyville. The interment with military honors accorded will follow at the Sheakleyville Cemetery. Friends may call at the funeral home on Tuesday from 4:00 - 7:00 pm and may share memories and condolences online at snyderfh.com
Memorial Tributes may be made to Downtown Ministries, 172 Main Street, Greenville, PA 16125 or to the St. Paul's Keeping The Promise Fund, 339 E. Jamestown Road, Greenville, Pa. 16125.
Published on August 6, 2017
To plant a tree in memory of Dick Johnson, please visit Tribute Store.

Plant a tree in memory
of Dick

A place to share condolences and memories.
The guestbook expires on November 04, 2017.

Restore this Guestbook to share a memory or message of condolence of your own.