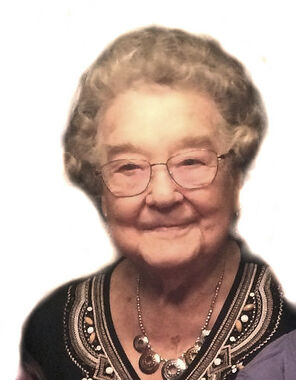 Back to Elsie's story

She was born March 10, 1928 in Pocahontas County, West Virginia, a daughter of Isaac and Claudia Galford Sheets. She married Anthony W. Setta October 1, 1949 and he preceded her in death June 30, 2008.

Elsie was a graduate of Townville High School. She was an inspector at Talon, Inc. for 46 years, retiring in 1986. She was also a member of St. Agatha Church.

Elsie was an avid reader and enjoyed sewing. She spent many years assisting the Afghan Department in the home show building at the Crawford County Fair. Elsie especially loved spending time with her family and grandchildren.

Interment will be in Lyona Cemetery

Memories and condolences may be shared at www.waidfuneralhome.net
Published on January 13, 2020
To send flowers to the family of Elsie M. Setta, please visit Tribute Store.

Send flowers
in memory of Elsie

A place to share condolences and memories.
The guestbook expires on April 12, 2020.

Beckie Snow
Oh that sweet face...I worked with Elsie in the afghan department at the fair for many years, one of the sweetest ladies I have ever met. Prayers for her family.
View all