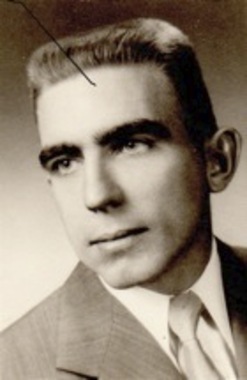 Back to James's story

Dingle, James Hunter was born on September 9, 1922 in Meadville. PA. He graduated High School from Guys Mills, PA and went on to serve in the 11th Armored Division during World War 2. After the war, he attended Grove City College and earned a BA and an MBA from Indiana University. He taught high school math for four years in Waveland, IN and for 29 years in Elk River, MN. He was also a caretaker for the Oliver Kelley farm in Elk River, MN, for 24 years.

He was preceded in death by his parents, Paul and Mabel Dingle and his wife of 59 years, Grace Dingle. Visitation Tuesday, February 11th, 2020 from 4pm to 7pm at Dares Funeral Home 805 Main St. NW Elk River, MN. The funeral service with be held on Wednesday, February 12th, 2020 at Coon Rapids United Methodist Church, 10506 Hanson Blvd, Coon Rapids, MN at 11am with visitation held one hour before the service. Private interment Ft. Snelling National Cemetery. Memorials are preferred to the Disabled Veterans of America. Arr. Dares Funeral Home 763-441-1212 www.daresfuneralservice.com
Published on February 11, 2020
To send flowers to the family of James Hunter Dingle, please visit Tribute Store.

Send flowers
in memory of James

Jim Lease
Jim Dingle was the Department Head for the Elk River math department when I graduated from college and was hired to teach math in Elk River. He was a great mentor and helped me get a good start teaching. He was also kind and generous and offered help and support when I missed a number of months of work because of illness. He influenced many students, both directly in his classroom and indirectly through me in my classroom. He will be missed.
Sheri Simpson-Schultz
Mr. Dingle made a impact the lives of so many. He was my math teacher in the 80s. I loved him and his class. I went on to become a math teacher, most because of him. I ate lunch with him regularly during my 4 years in high school. I have been an educator for 31 years. I am currently a principal. Mr Dingle continued to impact student beyond his direct service but through the lives of those he taught. I sent him. Christmas card each year and feel blessed to have had the opportunity to thank him repeatedly. He is an angel watching over us. Thank you for sharing him.
View all