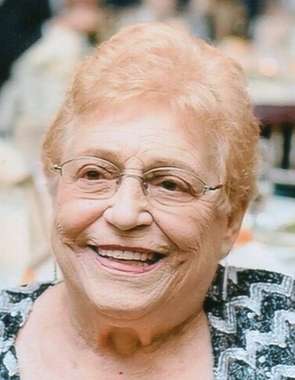 Back to Rose's story

Rose M. Cappellino, 88, of Meadville, passed away Saturday, November 16, 2019, at Marquette Hospice House.
Rose was born in Meadville, on October 18, 1931, a daughter of the late Joseph and Frances (Miceli) Badagliacca.
On July 31, 1954, Rose married Nick T. Cappellino; he preceded her in death on May 29, 2012.
She was a lifetime member of St. Mary of Grace Roman Catholic Church where she was also a member of the Altar Rosary Society and served as a Eucharistic Minister. Her faith was very important to her, and she volunteered countless hours with church events including working funeral dinners, assisting with church finances, and proudly earning the nickname of "the Cannoli Queen of St. Mary's".
Rose attended the former St. Brigid Catholic School and was a graduate of Meadville High School. She had been employed by the former Krogers Grocery and A.C. Machine. She enjoyed being a member of the Italian Civic Club Auxiliary. Among her favorite things to do was cooking, baking, decorating for the holidays and making crafts. She loved her family dearly and her greatest joy came from spending time with them, especially her grandchildren. Rose will be sadly missed.
Rose is survived by four children Gina McMurray (Richard), Lynn Trenney (Donald), Debra Ulven (Mark) all of Pittsburgh, Joseph Cappellino (Lisha) of Richmond, VA, grandchildren Lindsay Strittmater (Brandon), Emily Logue (Connor), Matt McMurray (fiance' Amber Jenkins), Chad Trenney (Tara), Jaimie Brown (Joe), Alexandra Ulven, Allison Ulven, Nicholas Ulven, Connor Cappellino, Christian Cappellino, Mikayla Cole, Kendall Cole, two great grandchildren Roman Trenney, Jenson Strittmater, two sisters Frances Belknap (Gary) of Meadville, Theresa Vandervort (Larry) of Buena Park, CA, two brothers Andrew Badagliacca (Bernadine) of Mebane, NC, John Badagliacca (Eileen) of Meadville, numerous nieces and nephews.
In addition to her parents and her husband, Nick, of 57 years, Rose was preceded in death by a sister Margaret Perricone, two brothers Joseph Badagliacca and Benjamin Badagliacca.
Family and friends are invited to call on Thursday from 2-7 PM at STEPHEN P. MIZNER FUNERAL HOME & CREMATION SERVICES, INC., 404 CHESTNUT ST., MEADVILLE, with the Rosary to be recited at 6:30 PM.
A Mass of Christian Burial will be celebrated at 10 AM on Friday, November 22, 2019 at St. Mary of Grace Roman Catholic Church, 1085 Water St., Meadville, with Fr. Jeffrey Lucas, Pastor, officiating.
Rose will be laid to rest with her husband, Nick, in St. Brigid Cemetery, West Mead Twp.
Memorial contributions may be made in Rose's memory to Marquette Hospice House, 766 Liberty Street or Meadville Community Soup Kitchen, 956 S. Main Street, both in Meadville, PA 16335.
Share a memory or condolence at www.miznerfuneralhome.com
Published on November 18, 2019
To plant a tree in memory of Rose M. Cappellino, please visit Tribute Store.

Plant a tree in memory
of Rose

A place to share condolences and memories.
The guestbook expires on February 16, 2020.

Full Of Love Bouquet was purchased for the family of Rose M. Cappellino by Jacob Brown.  Send flowers

Fall Fantasia was purchased for the family of Rose M. Cappellino by john kent.  Send flowers

I’m gonna miss u aunt Rosie, you are loved by everyone in my heart forever